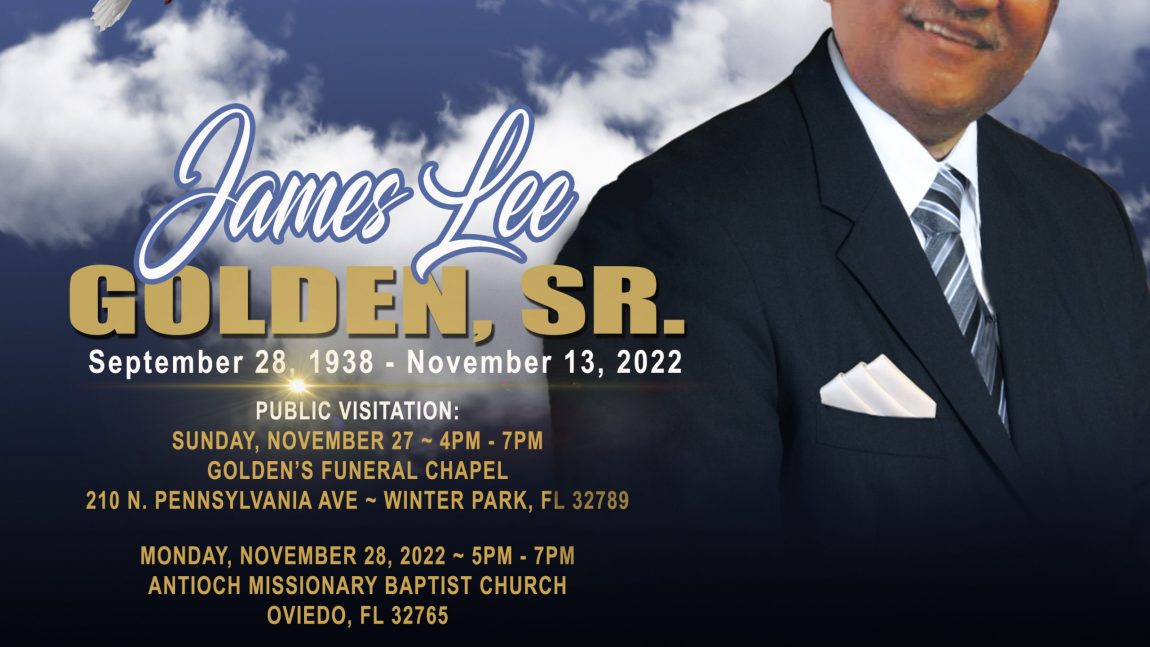 “Then the LORD God formed man from the dust of the ground and breathed the breath of life into his nostrils, and the man became a living being.”  -Genesis 2:7

James Lee Golden, Sr., founder and owner of Golden’s Funeral Home is the son of the late Claxton Golden and Nellie G. Golden. God breathed the breath of life into James on September 28, 1938 in Oviedo, Florida. He was the eldest of eight children.

He accepted the Lord Jesus Christ at an early age and was a member of Antioch Missionary Baptist Church in Oviedo, Florida.

James attended the public schools of Seminole County and is a 1957 graduate of Crooms High School (Sanford, Florida). James spent his early years with his family in Oviedo, Florida before relocating to Winter Park, Florida in the 1950’s where he spent most of his adult life.

James leaves behind a legacy of helping people in need. He took the opportunity from the mentorship and training from others in the business to pursue and establish his own business in the funeral home industry. He started with his first funeral home in 1970 in the town of Eatonville, Florida (that building is now the Town Hall of Eatonville). He has had previous locations in Eustis, FL, Oviedo, FL and Kissimmee, FL. He was a former member of the Mortician’s Association.

Culminating forty-seven years of service to the Central Florida community, James retired in 2017 and passed the torch on to his son, James II to carry on his great legacy.

Prior to establishing Golden’s Funeral Home, James was an insurance agent for Prudential Insurance Co.

In his leisure, James enjoyed cooking on the grill for family and friends.  He firmly believed that the “greatest food” was fresh hot fish. His greatest pleasure was spending time with his grandchildren.

On Sunday, November 13, 2022, God in His infinite wisdom looked down through the corridors of time and gazed upon His creation. He spoke softly and said, “It is done! Yes, the masterpiece I created is now finished and I am well pleased.” He gently called the name, James Lee Golden, Sr., saying, “Your work here on earth is now complete. You are now invited to come home!”

James is predeceased by his parents Claxton and Nellie Golden.

“Then shall the dust return to the earth as it was: and the spirit shall return unto God who gave it.”