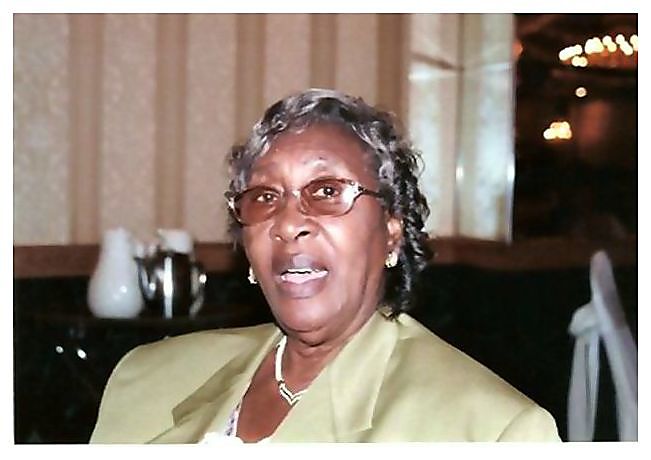 Marion attended the All Saints Elementary School on Studley Park Road, in Kingston. Upon leaving the school, she told her father that she wanted to learn sewing, so she was sent to sewing school. Marion was a fast learner, and she became an excellent seamstress, sewing wedding gowns, bridesmaid dresses, school uniforms, and suits.

On Jamaica’s Independence Day 1963, Marion was in a terrible motorcycle accident in which she almost lost her left leg. She suffered much trauma, and her children, Patricia, Herbert Jr., Marcia, and Christopher had to do without their mother for a while. Christopher was just five months old at the time, so Marion’s mother took care of him. This separation was not an easy one for Marion. When she left the hospital, she had to go into a Rehabilitation Facility to learn to walk again.

After her stint in the Rehab, Marion resumed her sewing. When she was not sewing at home, she was volunteering at the Whitfield All Age School, teaching women the different styles of hand stitching and embroidery. Marion later found employment with Venus Manufacturing Company, which sewed work uniforms for various organizations in Jamaica. She eventually rose to the rank of Quality Controller in the company, which later changed its name to Sharon Lyn Originals.

Marion was a very independent person, strong-willed she did not put up with ‘foolishness.’ She and her husband Herbert separated due to his infidelity. She was now a single mother. Marion believed in working for what she wanted, so she worked very hard. She held two jobs, Sharon Lyn Originals in the day and Gaiety Cinema (Palace Amusement Company) at nights. Marion worked long hours and reached home after midnight most days.

It was a struggle raising seven children on the meager salary that she received from both jobs, so Marion would ‘throw pardner’ and when she got her ‘draw’ she would use it to purchase significant items for the home.

Marion was an ardent movie buff; she knew every actor’s name and their role in films. Don’t even dare to contradict her! Her favorite was the westerns that she still watched up to recent months before her passing. Marion also had an insatiable love for reading, a love that was passed on to her children. She collected comic books and romance novels and loved to trade these with the book traders near her workplace. Marion loved to play ludo and draughts (checkers) and the card game coon can. In her later years, she binged on Find-a-Word.

Marion and the children lived in a fairly decent neighbourhood, but it was beginning to get unsafe, so Marion decided it was time to move. She had heard about the new homes being built in Portmore, St. Catherine and she decided to apply for one and was successful in owning a house situated in Waterford, St. Catherine.

Marion made the house in Waterford into a home. It was the meeting place and reunion spot for the family, and it held many fond memories for all of her children.

Marion strongly believed in sharing and insisted that her children share no matter how little they had because there was always someone that was less fortunate. Marion was willing to help others and would take in boarders even though she did not have enough for her children.

Marion grew up in the Roman Catholic faith. However, she became ‘born-again’ and was baptized in the Charismatic/Pentecostal faith in September 1992 and lived faithfully for God and our Lord Jesus Christ ever since.

Marion migrated to the Bronx, New York in November 1996 to live with her son Herbert Jr. Her new home was now the place for all reunions because everyone wanted to be where Mama was. She subsequently filed for Patricia, Marcia, Ricardo, and Garfield to join her. Christopher was already living in Florida and Roberto in Canada after being adopted by her sister Kathleen when he was nine years old. Marion had a generous heart, and she decided to share her child with her close sister who did not have a child of her own.

Marion faced many medical challenges during her life, and she would overcome them one by one.

Marion went to live with daughter Marcia in Winter Park, Florida in April 2017. An ardent churchgoer she loved her new church family, always saying she wished she could do something for them. A giver, Marion would not go to church without an offering. She deemed it disrespectful to not give back something to the Lord for all that He had done. “Give, no matter how small” was her favorite saying. She would place the little she had in an envelope whether it is for her church or Feed the Children. Another favorite saying of hers was “Never mind, forgive them.”

Marion will forever be loved and cherished by the many lives she impacted. Her family, relatives and friends, her community, her church families, acquaintances, and strangers.

Marion leaves behind to rejoice and continue the legacy of caring and sharing, seven children, 23 grandchildren, ten great-grandchildren, five sisters, two brothers, one son-in-law, four daughters-in-law and other relatives.

We miss you Marion, but we are rejoicing because we know that you are in heaven, walking uprightly with MiGranny and Pops, your loving parents. You will finally get to play with your little brother Bruce.